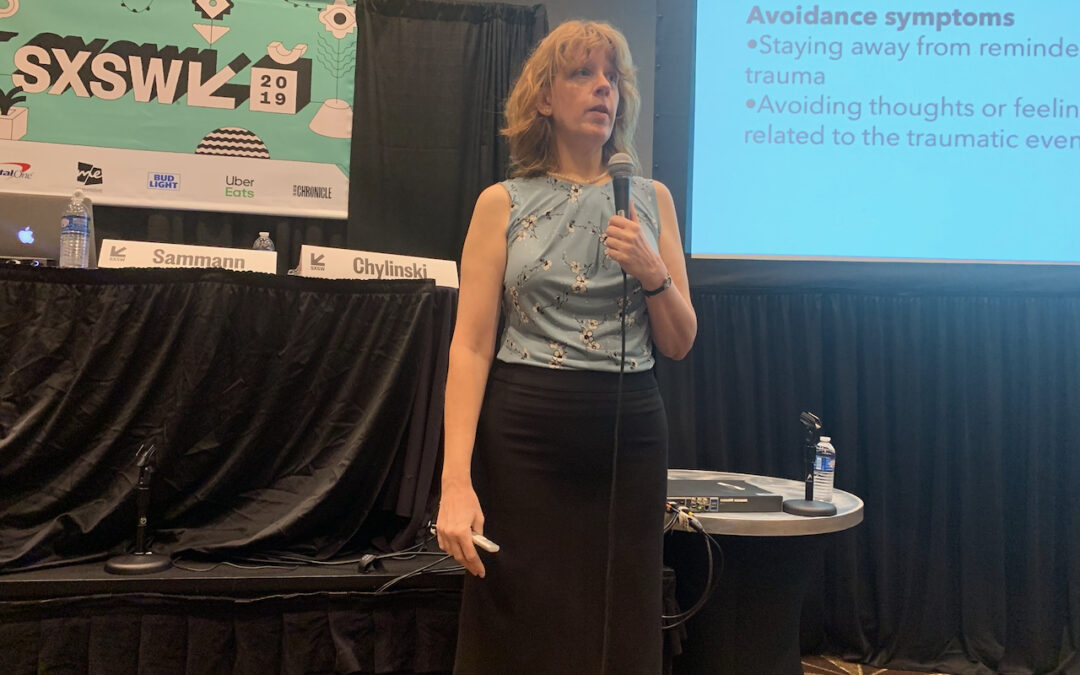 About a year after walking away from bombs at the finish line of the Boston Marathon, a friend asked me to share my story at a conference. That was the start of what has now been several years of speaking in public about my trauma; of standing up in front of strangers, sometimes literally hundreds, and talking about my mental health struggles. And advocating for more attention for those who experience mental health and emotional wounds after violence.

It was an easy decision to say yes to my friend when he asked. I was desperate to have people understand my side of the story, one that isn’t told much in the aftermath of mass violence.

Over the years, I’ve learned a lot from talking to groups, large and small, about my trauma about dealing with the mental health aftermath of violence, of how our systems do or don’t respond, and about how to heal.

Here are three things I’ve learned about sharing a personal story so publicly.

Those who’ve not experienced significant trauma may not quite get this feeling. For me, from the moment the first bomb exploded, I’ve felt alone. Even after remembering later that of course I was not the only one there when it happened; there were hundreds of us who experienced this. In talking about it publicly, it prompts others to share their stories with me—of traumas, of struggling with post-traumatic stress disorder.

One year after the Boston Marathon bombing I attended the race, sitting once again in the bleacher seats, not far from where I’d been when the bombs exploded. I chose to do this so I wouldn’t be afraid to go to events like this again. And it was the last time I will ever watch a marathon. At a talk a few years later, I expressed that I didn’t want to go back to watch the race, but that I wanted to want to go back. Afterwards, a gentleman approached me, told me briefly about his post-traumatic stress disorder (PTSD) and said, “You don’t have to ever want to go back. And you don’t ever have to go back.” His support helped me feel so much less alone.

Not everyone is ready to hear the story.

I started speaking in part from a feeling of despair and hopelessness. My experience as a victim and survivor was shaped by the fact that we don’t talk much about the psychological impacts of trauma, especially not in the immediate aftermath. I looked for my story, I looked for validation that what was happening to me was normal, and didn’t find it. And some people still don’t understand why the mental health impact of violence is important to pay attention to; for some, only physical injuries count.

After a presentation to a group of first responders, I met with a man in the audience who told me he’d been fired from his job as a first responder. He’d enlisted and gone overseas to fight in a war. When he returned home he had PTSD and his boss gave him a scant few weeks to recover before firing him. That alone seemed shocking to me – I’d expect first responder organizations to understand trauma. I was even more surprised a few weeks later to receive the anonymous feedback from the talk. One person, a first responder in the audience, wrote: I don’t know why she was speaking to us. She said she suffered but she wasn’t even injured.

I have a lot to learn about trauma.

My experience of trauma and mass violence is lived, not academic from books and professors and hours in clinics observing and dealing with patients. Because it’s so personal, I can only see it from a certain perspective. That’s ok. It’s my trauma and my experience. But in order to advocate for real change and to effectively communicate to my audiences in a way to persuade them to action, I need additional perspectives.

So, I’ve reached out to experts. I’ve read and read and read (and then read some more) about trauma. And I listen when the people in my audience ask questions or push back on something I’ve said. Most people do that pushback gently, aware they’re talking about something so personal and painful to me. And I’ve learned so much from those questions—enough that each presentation is informed by the questions and comments from the previous presentation.

I’m still learning. Still looking for the right connections to help me further my advocacy work. And I’m so glad that my friend asked me to share my story in public. It’s made all the difference in my own healing. And, I hope, for others who’ve been helped by someone who heard my story.